SSAB, LKAB and Vattenfall to build a globally-unique pilot plant for fossil-free steel

SSAB’s, LKAB’s and Vattenfall’s pre-feasibility study is giving the green light for the fossil-free steel initiative, HYBRIT. For the first time in 1,000 years, there is an opportunity for a technology shift and, as early as this spring, a globally-unique pilot plant for fossil-free steel is being planned for Northern Sweden. The planning and designing is expected to cost SEK 20 million and it recently became clear that the Swedish Energy Agency will finance parts of the project.The initiative could reduce Sweden’s total carbon dioxide emissions by 10% and those in Finland by 7%. The reduction in Sweden has been described as being crucial if Sweden is to be able to meet the goals of the Paris Agreement.

“It is with great pleasure that we can announce today that we are giving the green light to the initiative to proceed with the planning and designing of a pilot plant for fossil-free steel in Luleå and the iron ore deposits in Norrbotten. We hope to be able to break the ground already before the summer. This spring we’ll also start investigating the possibilities of broadening the project to include Finland. We are also very pleased that the Energy Agency wants to support us in this project,” said Mårten Görnerup, CEO of HYBRIT.

This spring the planning and designing of the pilot plant will be initiated. The cost is estimated to be SEK 20 million and it was recently confirmed that the Swedish Energy Agency will finance half of this, while the other half will be covered by SSAB, LKAB and Vattenfall. The Swedish Energy Agency has earlier contributed SEK 60 million to the pre-feasibility study and a four-year-long research project.

Already before a solution for fossil-free steel making is in place, SSAB aims to cut its joint carbon dioxide emissions in Sweden by 25% by as early as 2025, through conversion of the blast furnace in Oxelösund, Sweden. Between 2030-2040, the aim is convert also the blast furnaces in Luleå, Sweden and Raahe, Finland to eliminate most of the remaining CO2emissions and to attain the target of being fossil-free by 2045.

“HYBRIT is a significant part of the road towards SSAB’s goal of being fossil-free by 2045, and the report from the pre-feasibility study shows not only that is it possible to carry out this initiative, but it can also create exciting future opportunities for us as a company. We want to be part of the solution to climate change,” said Martin Lindqvist, President and CEO of SSAB.

“Fossil-free steel production starts in the mine, and we’re currently working intensively on how the next generation of pellet plants will be designed, as well as how a future electrified and more highly automated mine should be designed. HYBRIT is an important driving force for LKAB,” said Jan Moström, President and CEO of LKAB

“It’s very positive that we can take the next step with a unique pilot plant, for both the project and for our work on the climate challenge. The industrial electrification and climate-smart hydrogen will be crucial factors in lower emissions and a fossil-free society,” said Magnus Hall, President and CEO of Vattenfall.

“With our commitment to the HYBRIT initiative, we are contributing to the long-term competitiveness of the Swedish steel industry and gearing up work on the unique green energy systems in Sweden. In addition, we help driving the transition to a fossil-free industry and a sustainable society,” said Erik Brandsma, Director General at the Swedish Energy Agency.

Steel is a significant element of modern society, and global demand for steel is expected to increase as the world’s population grows and urbanization increases. If a new process cannot be found for ore-based steel production, carbon dioxide emissions from the steel industry will increase by up to 25% by 2050.

Coal and coke, which are shipped to Sweden from places including Australia, are currently used to reduce iron ore into iron. The idea behind HYBRIT is to use hydrogen, which has been produced with electricity from fossil-free Swedish sources. The emissions would then be normal water.

Sweden and Finland have a unique opportunity to drive an initiative for fossil-free steel, with good access to climate-smart and fossil-free electrical power, Europe’s highest-quality iron ore and a specialized, innovative steel industry.

To be able to carry out this project, however, significant national contributions are still required from the state, research institutions and universities. There has to be good access to fossil-free electricity, improved infrastructure and rapid expansion of high voltage networks, research initiatives, faster permit processes and the government’s active support for pilot and demonstration facilities and long term support at EU level. 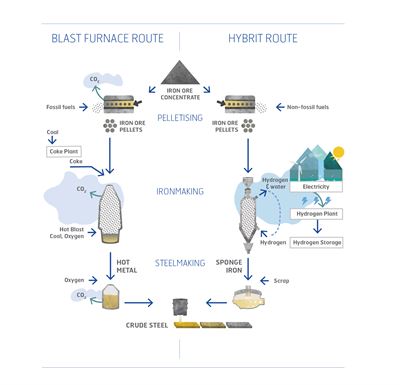 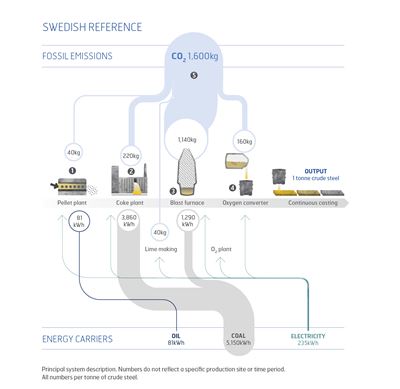 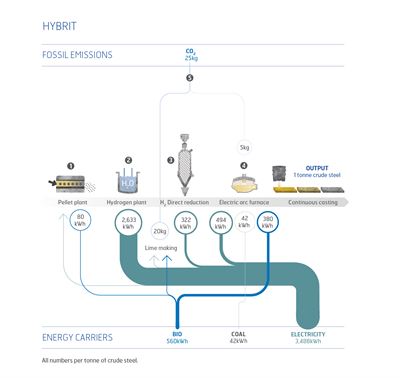 SSAB, LKAB and Vattenfall to build a globally-unique pilot plant for fossil-free steel 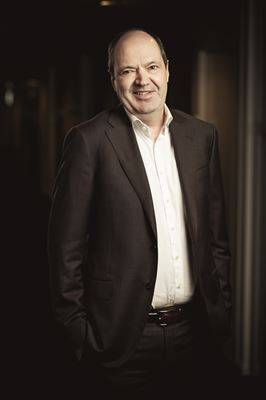 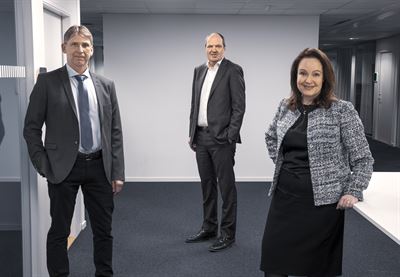