The road situation on Fv. 714 has long been critical with one of the highest accident rates in the region. In 2018 started the operation on changing that with building of the Åstfjorden Bridge, two new tunnels and new roads associated to this. 5.6 km long new road will cut the travel distance with 6 km. Fv. 714 is the main road from Trondheim to Hitra, one of Norway’s most known Island that has several seafood suppliers. Over 100 trucks is passing this point every day.

Bird view perspective of the Åstfjorden Bridge. The bridge will cross the fjord at its narrowest. Here a moraine ridge is going perpendicular to the coastline. This ridge must be preserved. (Picture: Statens Veivesen web page)

The Bridge itself is 735m long with its highest point at 40 m giving a sailing height on 25 m. It is connected with tunnels in both ends. Cost of the project is estimated to be 1 350M NOK where the bridge itself is 370M NOK. The project is going according to plan with estimated deadline in 2020.

SSAB delivers over 776 ton of steel to the Åstfjorden Bridge. This is composed by 110 spiral welded RR900/20 mm piles in S355J2H quality together with 56 rock shoes made from structural steel with hollow dowel. It is 1650 m piles in total delivered in 15 m elements. This demands 28 trucks travelling from Oulainen in Finland to Åstfjorden West in Norway - covering the staggering total amount of 70 660 km in travel distance. The 56 piles are rammed 25 m into the soil down to bedrock and serve as the foundation for 5 columns. Four of them in water while one on land. 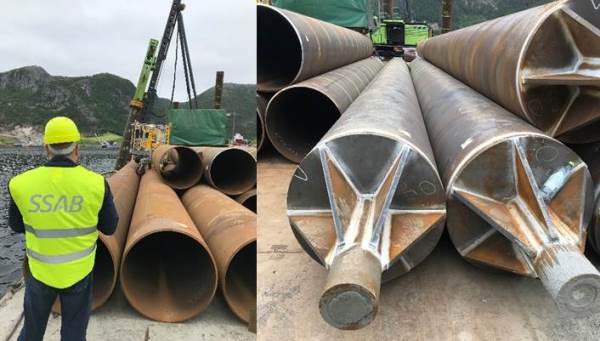 RR900/20 mm S355J2H spirally welded piles from Oulainen Finland. Rock shoe in structural steel with hollow dowel filled with concrete. The rock shoes are welded to the piles in controlled conditions at SSAB’s facilities in Finland.

Two other columns will rest on top of caissons pre made on a barge at site (BoaBarge33, only two of this kind in Norway). The caissons will be filled with ballast and concrete and put to rest on a cast in place concrete slab laid directly on top of good soil condition composed by a moraine layer. These are 19 m in diameter and 15 m high. The sailing inlet will be between these two and be 50 m wide. Dredging of the area is needed upon the installation. Pre-fabricated steel cases made of Aker Solution in Egersund (South in Norway) will be shipped to site and installed in 7 pieces - giving 8 span up to 100m wide. This will later be covered with a concrete cover. 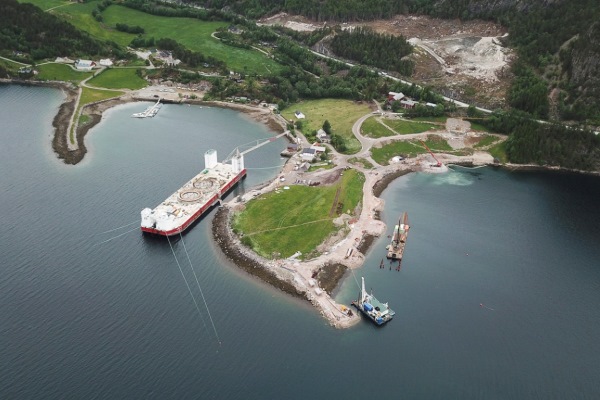 The picture is showing the moraine ridge where three barges are anchoring up. To left the BoaBarge33 where the two caissons is cast on place. The dredging barge furthest down in the picture and the barge were the foundation is occurring from in the middle of the picture. In the top of the picture is the tunnel inlet visible.

Kynningsrud Fundamentering AS’s machine - Junttan PMx28 - with up to 12 ton weight and 1.5 m fall height. The piling work is done both on land and in the fjord from a barge.