Innovative solar panel fields in the Netherlands, urban green corridors in Bangkok, eco farms in rural Vietnam and river parks in Colombia – the creativity flowed when architects and designers across the globe filed their entries for the 2018 WAFX prizes, ahead of this year´s World Architecture Festival (WAF). 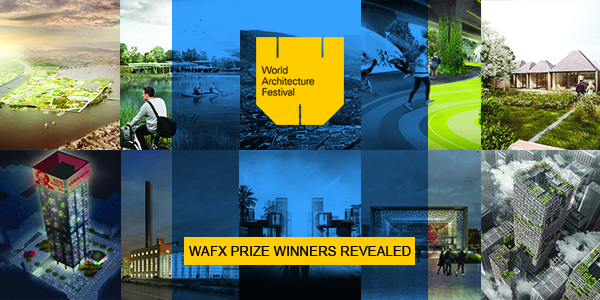 SSAB’s sustainable steel brand GreenCoat® is a WAF sponsor and supports again the WAFX prizes. Ten winners have now been announced, of which one will be awarded an overall trophy. The winning entries describe different future projects that address key ecological and societal challenges that architects are actively seeking to address over the next ten years.

Anke Meyer, Corporate Marketing SSAB commented: “For the 2nd year GreenCoat® is proud to support the WAFX awards and the innovative and forward-looking architectural concepts they showcase. By addressing key challenges architects will face in the coming years, these projects are perfectly aligned with SSAB’s own initiatives and ambitions. We look forward to welcoming all of the WAFX category winners at WAF and presenting the trophy to the overall winner.”

Ageing and Health - The Alder Center by Allford Hall Monaghan Morris
The Alder Centre was established in 1989 by a small group of health care professionals in partnership with bereaved parents who identified a gap in the services available. The Centre is unique within the NHS and internationally; providing bereavement counselling for families who have had a child pass away as well as a national telephone helpline and general counselling for hospital staff. A series of rooms configured like a big house, set inside a secret garden can be a familiar place for parents to meet, talk, grow things and have a cup of tea. The architecture is easy to use and simple to understand, informed by a conversational process with the counsellors, users and bereaved parents.

Building and Technology - W350Project by Nikken Sekkei
Nikken Sekkei’s research project seeks to demonstrate how developing a green city with timber structures can inspire a “more comfortable” global environment, and specifically how 350m super high-rise timber construction could be a symbol of future urban construction. The practice’s research focuses on challenges to the development of construction engineering technology for evolutionary timber buildings, as well as seeking solutions to global environment, nature, and urban environmental sustainability issues. The practice’s plan is to use ecologically sensitive methods, such as removing timber from dense forests that encourage healthy development, which will also help to bring the lumber industry back to life, revitalise local communities, improve habitat for forest creatures, and conserve biodiversity.

Climate, Energy and Carbon - Highway Solarpanel Field by 70F Architecture
70F Architecture’s proposed project looks to suspend vast arrays of solar panels above highways, rather than on fields, leaving farmland free for farming and doubling the ground-usage of infrastructure. The secondary goal of the project is showing how sustainability can be beautiful as well as functional; the semi-transparent solar panels are placed in an open and airy angle, providing a cupola of light, air and rain ‘play’. As a bonus the solar panel field creates a noise barrier of 18dB in relation to its surroundings, which is double that of a conventional highway noise reduction wall. This directly increases the quality and size of the buildable area next to the highway.

Cultural Identity - Ataturk Culture Center by Tabanlioglu Architects
The Ataturk Culture Center in Istanbul, Turkey, has been a focal point for the city since the building was constructed in 1960s, and was redeveloped after it burned down in 1970. Tabanlioglu’s design reasserts its place at the heart of the city’s arts and culture scene. Not only will the new centre have one of the largest opera houses in the world, but will also feature galleries, libraries, cafes and restaurants for visitors. The new centre forms a bond between past, present, and future, and unites through design, the urban fabric and culture of Istanbul and the Turkish people.

Ethics and Value - Sheltainer - Where Humanity Meets Hope by Sheltainer
Sheltainer is a building initiative that targets different categories of people including refugees, asylum seekers, students and low-income families. It intends to provide a solution that can be readily built anywhere in the world, easy to construct and affordable – hence, the shipping containers. There are millions of unused shipping containers around the world and recycling them not only provides shelter, but also helps reserve the sustainability of a community. The design for a Sheltainer project consists of eight homes per cluster connected together through a courtyard and attached to other clusters through open corners.

Food - Cuchi Organic Eco Farm by IF (Integrated Field)
Dramatic urbanisation and economic growth across Vietnam over the last 20 years has put pressure on the nation’s food industry. Cuchi Organic Eco Farm (COEF) is a masterplan design proposal for a 600 hectare decommissioned rubber plantation in Cuchi, Vietnam, aiming to transform the under-utilised site to be an organic farm focusing on the production of animal feed, livestock, fruit and vegetables in a closed-cycle operation. The first phase of 50 hectares is an agro-tourism destination that offers the visitor holistic experience of the food cycle. The project also offers facilities such as farm-stay accommodation, farm-to-table restaurant, farmers market, and co-farming area where one can rent varying sized plots of land specific to their needs.

Power and Justice - Tower Inten city by Savage Dodd Architects with UrbanWorks
A range of spaces feature in this substantial mixed-use redevelopment of a tower in Johannesburg, South Africa, from dedicated event spaces at the top of the building, to residential and commercial office floors. Wellprogrammed and vertically distributed social spaces are integrated with the compact living units allowing both the inhabitants and public to find comfortable and accessible space to socialise and relax. Their program allows for public interaction to ensure a diverse cultural and social life in the tower – which would otherwise run the risk of being a vertical enclave. The lobby is conceptualised as a large urban living room that serves both building inhabitants as well as the public. Large pivot doors create a double volume public interior which an inserted mezzanine animates. The mezzanine wraps around the building core providing a variety of retail opportunities.

Re-Use - Beloit College Powerhouse by Studio Gang
Transforming a former power plant into a student union and recreation facility, Studio Gang’s Beloit College Powerhouse Project seeks to replace an old model of energy with a new model to support the health and wellbeing of its many inhabitants. The Powerhouse is designed to become a centre for human energy, activity and health. Nestled between the Rock River and the college’s campus, the Powerhouse will serve as a recreational resource and a community forum, all the while fostering a public connection to the riverfront - embracing it rather than polluting it - that foregrounds the connection between human and environmental health. The judges were impressed not only with the repurposing of its cavernous industrial spaces, but with how the project maximises its riverfront location, utilising river water to manage the temperature of the building whilst also significantly minimising total energy use.

Smart Cities - 10 KM by Shma Company Limited
The 10km long green corridor proposed by Shma Company sets out a series of re-appropriated spaces, parks, footpaths and bridges to reconnect vast swathes of Bangkok along a north-south axis. Currently large and impassable highways have disconnected inner city areas with those adjacent to them, and the extensive use of concrete walls along canals has disrupted resident’s interaction with nature and the local environment. By breaking down these barriers and opening up the spaces, the designers hope to encourage healthier lifestyles, celebrate local urban cultures and spur sustainable development.

The overall winner will be announced live on the World Architecture Festival which takes place 28th to 30th November in Amsterdam.

For more details on this year’s WAF Awards and the festival please visit: www.worldarchitecturefestival.com @worldarchfest #WAF2018

The acclaimed “Lilla Integralen” apartment building by Sandellsandberg architects Stockholm, with a façade made from sustainable GreenCoat® color coated steel, from SSAB, has been shortlisted for the World Architecture Festival (WAF) Award 2019 in the category “Completed Buildings: Housing”.

The eye-catching “Lilla Integralen” features a façade made from GreenCoat® color coated steel, from SSAB, and has been named a finalist for the esteemed Swedish architectural award Plåtpriset 2019.

The newly renovated Baltic Station Market, featuring a roof made from sustainable GreenCoat® color coated steel, from SSAB, has been shortlisted for the World Architecture Festival (WAF) Award 2018 in the category “Old and New”.