Media archive Racing into the future with Docol Tubing
Share this:

Racing into the future with Docol Tubing

Attention to Docol R-Series Tubing is growing annually in the U.S. as race car manufacturers realize its benefits over the competing Chrome Moly 4130 material typically used for chassis and roll cages. 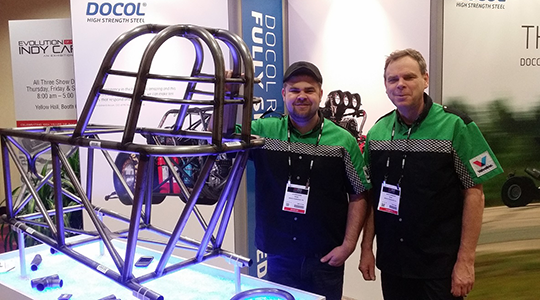 LG Eriksson and Mats Eriksson, from ME Racing in Sweden, in front of a racecar chassis made of Docol R-8 tubing. ME Racing has worked with SSAB from the start to introduce the R-8 tubes to the racing industry.

As an integrated mill producing the steel as well as the tubing, SSAB has been able to develop a more consistent, ductile and welder friendly product compared to the Chrome-Moly Tubing 4130 material, according to Kim Colvin, RSM, Americas’ Automotive.

Chrome-Moly 4130 has been the typical material used for parts like roll cages, chassis and frames in racing cars. It is composed of the alloying elements Chromium and Molybdenum and hence the name Chrome-Moly. The Docol R Series tubing is highly ductile particularly in the heat affected zone and can absorb a great deal of energy before cracking unlike the competing Chrome-Moly material. This is important from a safety perspective in a crash situation.

As such, more than 40,000 feet of Docol R-8 tubing (named R8 to represent tensile strength of 800 MPa) has been shipped in the U.S.in 2015, a 56% increase in sales over the year before, according to figures from A.E.D. Motorsports Products. A.E.D distributes the Docol tubing in North America for SSAB for various applications in motorsports in addition to bicycles, OEM recreational equipment, tools and support equipment.

“Docol R8 is the first and greatest product to build the race car with since 4130 (was introduced) in the 1940’s,” said Al Lowe, President of A.E.D. Motorsports. “We are also supporting a component (the chassis) that very few in the industry considered needing improvement. It is with the efforts of SSAB, A.E.D., ME Racing Services and a number of others that brought the need for changes to this sport.” 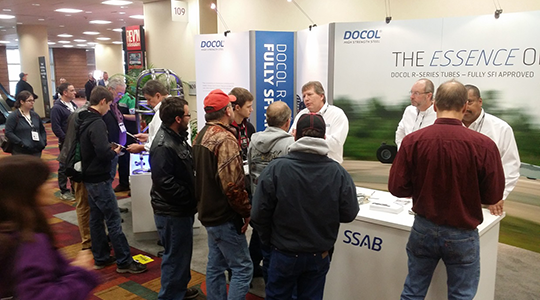 Great exposure for R8 tubing at a major racing show

SSAB recently exhibited at the PRI trade show (Performance Racing Industry) to educate more people about R8 tubing and its use for safety critical applications as well as to increase awareness of SSAB’s production capabilities. The staff also held daily seminars at the show.

“PRI is the largest motorsports exhibition of its type in the world,” said Kim. “It is a great forum for us to showcase who we are and what we do.”

Almost everything you need to build a race car or racing bike can be seen at this show—from fabricators of roll cages and chassis to engines, suspension, racing apparel, wheels, software and more. The show was held recently in Indianapolis, Indiana—the hub of motor sports in the U.S. and home for many of the racing teams.

“The attention we got at the show was amazing,” said Kim. “Nowhere else in the world is racing as popular as it is in the U.S.”
SSAB’s Docol tubing passed stringent tests and was approved in 2012 by the SFI Foundation which administers standards for quality assurance of specialty performance and racing equipment internationally. The approval was expanded to all SFI drag racing chassis in 2015.

“We’ve come a long way since the initial qualification of the product,” said Kim. “We used to hear customers ask what the product is—now they say I’ve heard about it and want to know more.”

Beyond drag racing, the product is growing in popularity among other applications as well. “We’ve received inquiries from rally car manufacturers, late model dirt and off road vehicles as well as from NASCAR wanting to know more about the material,” said Kim.

Docol R-Series Tubes had been produced in Borlange but production will be moving to Finland in the near future primarily at the Hämeenlinna plant or Lappohja as a second option.

• Roll formed tube with longitudinal weld
• Highly ductile even in the heat affected zone; in crash situation absorbs a lot of energy before cracking
• Accepted by SFI who sets the safety standards for the racing industry
• Available as R-8 tubing (tensile strength of 800 MPa/116ksi) and R-10 (tensile strength of 1000 MPa/145ksi)
• Equivalent strength as Chrome-Moly 4130 with better ductility and weldability
• Weldable in MIG & TIG