For the third consecutive year, Dalarna University participated in the Delsbo Electric competition and for the third consecutive year, won the class. The competition is based on measuring how much energy is used to move one person one kilometer. By lowering the weight using SSAB high strength steel among other things, Dalarna University’s Eximus III vehicle managed to get down to 0.636 Wh/pkm. 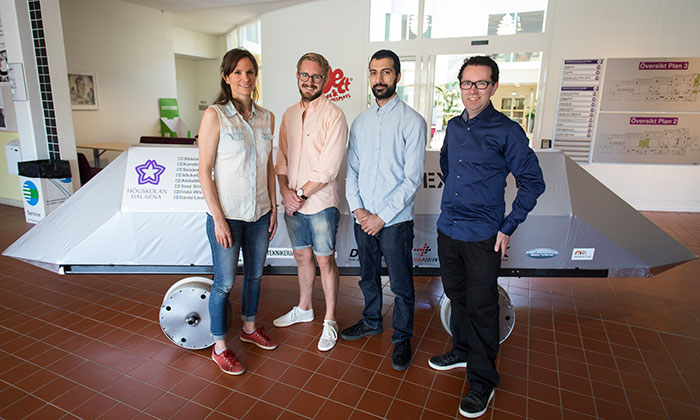 By comparison, Luleå University of Technology’s vehicle Acus, which came in second, had an energy consumption of 0.707 Wh/pkm. Delsbo Electric started as a way to save Dellenbanan from closure. Today, it is a competition where the colleges compete on who can build the most energy-efficient vehicle.
“It’s about proving how energy efficient rail transport is,” said Toný Sömsk, one of eight students who participated on the Dalarna University team.

“The Eximus project is something that the students do outside of regular school hours, hence the name Eximus, which means extraordinary or out of the ordinary,” explained Patrik Kenger, head of Mechanical Engineering at Dalarna University.Since the two predecessors Eximus I and II had both won their competitions and Eximus II even beat world records, the project team soon began to focus on lowering the weight of the vehicle.
“We started by looking at different materials, such as carbon fiber and, of course, aluminum, as had been used earlier,” said Abdullah Fakih. “Also, how we could make the design more aerodynamic.”


Docol R8 in the drive shafts

Being able to use high strength steel to lower Eximus’ weight was pure coincidence.
“I told one of my neighbors about the project, who became very interested and as it turned out, worked at SSAB. He provided contact with Marita (Hane), who in turn involved Lars Lagestam,” explained Susanna Ottosson, who was also involved in the project.
With the help of Lagestam, the project team received suggestions on how they could use high strength steel to lower the weight of Eximus III further. Docol 1200 M is used in the wheel enclosure that surrounds the hub and Docol R8, which is developed for racecars, is in the drive shafts.
“If we compare the weight of the drive shafts in Eximus III with Eximus II, the weight is halved,” said Sömsk.

Less than a milliliter

The total weight reduction of Eximus III compared to Eximus II is 31.5 kg. And if compared with Eximus I, the weight reduction is 64.5 kg.
“Most important, however, is that the energy consumption is reduced. Last year, it was calculated that the fuel consumption to transport one person ten kilometers by Eximus II was one milliliter, this year it’s actually even less,” said Sömsk.
This fall it’s time for the next year’s school of engineering students at Dalarna University to further develop Eximus into becoming even more energy-efficient.
“It’s definitely possible to improve Eximus even more. It may just be necessary to alter the thought processes a little.”
The project group included Simon Emanuelsson, Karolina Gilén, Susanna Ottosson, Michelle Jansson, Abdullah Fakih, Tony Sömsk, Frida Nilsson Axelsson and David Lindfeldt, all engineering students at Dalarna University.