The overlay material used for Duroxite™ 300 contains a uniquely high volume of an ultra-fine complex borocarbide phase. The grain size is refined down to 500 nm, which makes the borocarbides approximately 200 times finer than traditional chromium carbides.

The high wear resistance of the borocarbides allows for a reduced overlay thickness compared to traditional overlays. This results in a lighter product with increased service life. And like the other Duroxite™ plate products, Duroxite™ 300 maintains a consistent wear resistance from the surface down to 75% of the overlay.

Stop by SSAB’s booth #1052, at AGG1 and learn how the new DuroxiteTM 300
takes durability to the extreme and beyond.

Duroxite™ 300 is produced in the U.S. and currently available in North and South America. More details about Duroxite™ 300 and the other overlay products can be found at www.duroxite.com. 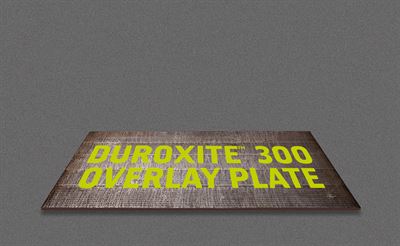 The Hardox Wearparts® network has been growing fast and in early June it reached a new milestone of 400 centers in 85 countries. We will continue growing the network fast to support our customers with wear parts and services worldwide.

SSAB Special Steels is aiming for 1.35 million tonnes of shipments by 2020. Part of this will come from upgrading but expanding sales in emerging markets will also play an important role in achieving this aim. Latin America is one potential geographical area for growth. We want to maintain and strengthen our position as the global leader in wear, structural, protection and tool steels as well as in related value-added services.

Close collaboration is the key to success

Joining the Hardox Wearparts network one year ago was the start of a common growth story both for Industries Dodec and SSAB in the Quebec area in Canada. Joint marketing efforts have enabled new ways of making the wear parts business grow and customers’ lives easier.