The wave power station in Sotenäs on Sweden’s west coast is now in operation. And SSAB is on board and delivering steel to the new sustainable energy facility.

“I was contacted five years ago by the company Seabased,” explained Patric Lidström, area sales manager for facility sales in Sweden. “Then their designers/builders called to find out about steel for a ‘new type of sea-based generator’. This led to further discussions and we sent sample sheet so Seabased could test our Domex 355 sheet.”

Talks then continued with Seabased about the choice of sheet and processing, as well as training for designers/builders and buyers at Seabased. Stefan Berglund is now the account manager for Seabased.

“It’s great fun being part of such an innovative and exciting project,” said Berglund. “It’s particularly enjoyable as it’s a sustainable way of producing electricity, which of course is completely in line with SSAB’s vision.” 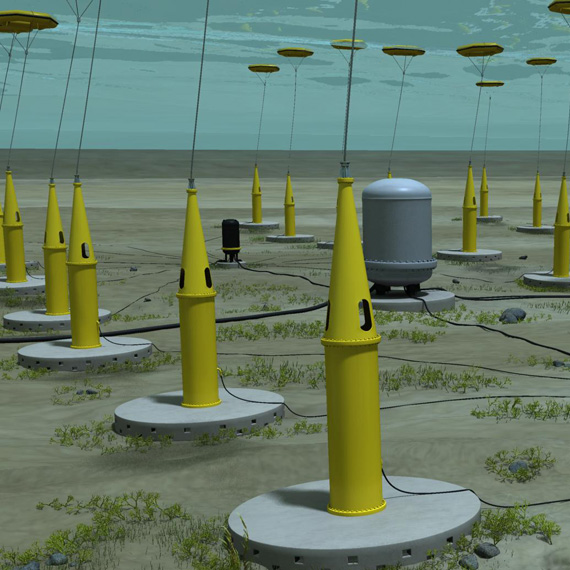 The company Seabased is an offshoot from Uppsala university. Something that started as a research project for students has now become a commercial enterprise in wave energy, and both students and professors at the university are working with the company. Apart from Seabased, energy company Fortum and the Swedish Energy Agency are also backing the project.

Sotenäs is the first wave power station to be connected to the Swedish power grid. Six different transformers have been placed on the seabed and on the surface are large buoys which utilize the movements in the waves. The power station is reported to be the first in the world with multiple units and transformers under the water.

“SSAB has contributed to the design of these yellow buoys, which resemble large donuts,” said Berglund. They are four meters in diameter and two meters high. SSAB has also supplied sheet for the concrete bases on the seabed.

Seabased also has several projects in progress abroad. For example, on islands where the price of electricity is high and there is a shortage of land.

So far, the volumes are not large for SSAB, just a few hundred tonnes per year, but there are requests for larger orders of over a thousand tonnes now that Seabased has had a breakthrough in other countries, in a number of different projects in Africa.

SSAB’s materials for the wave power station are produced both in Borlänge and Oxelösund, and Tibnor has also been involved in the deliveries.

“Although these are quite small volumes so far, it’s still very interesting to be part of a project that is at the cutting edge of sustainable energy and environmentally friendly energy systems,” said Berglund.

And Patric Lidström expressed his hope for continued positive collaboration with Seabased.

”We are in a strong position with Seabased thanks to the initial help we offered the company. The collaboration is working very well and they know what our different skills are and what we can offer. Going forward, they will also take our steel and applications course to learn more about the products we have to offer.”

SSAB has updated its Supplier Code of Conduct (SCOC) to further clarify expectations toward suppliers. The new version includes topics such as human rights, modern slavery, biodiversity, recycling and fair competition and antitrust in alignment with international standards.

SSAB and its subsidiary Ruukki Construction are donating materials to Ukraine for the reconstruction of roofs and to make field stoves. These products will be transported to homes by the charity OperationAid.