Ferrari red and John Deere green. The new custom-designed cassettes for transport of cut lengths and slabs inside SSAB in Borlänge are clearly visible where they stand, waiting for use.

“It’s about increasing safety as well as making it easier for truck drivers and unloaders to get it right,” explained Jenny Lindström, section manager for Internal transport in Borlänge.
The new cassettes are 16 and 14 meters long, which is 2-4 meters longer than the yellow cassettes. In order to distinguish between the different lengths of the cassettes, they chose to give them different colors. As the existing cassettes are either blue or yellow, the choice was for red and green this time. Lindström explained that the color red for the longest cassette was a deliberate choice.
“The longest cassette has an overhang of 4 meters from the trailer which is 12 meters long, so we chose to make it red, as red is a warning color. This will make it clear to everyone else that a long vehicle is approaching.”

To further increase safety, the new cassettes are fitted with reflectors on the sides. Another important change and improvement to the design of the cassette, is the increased ability to secure the load.
“It is extremely important to center the load on the cassette and to load from the front so as to be able to move the load safely. The new cassettes have therefore been fitted with movable posts,” explained Lindström and showed how this works on the largest cassette.
“The possibility of securing the load on the old carts is very limited. Movable posts and four different positions on each side of the cassette mean we are able to secure different types of widths and goods more easily.” 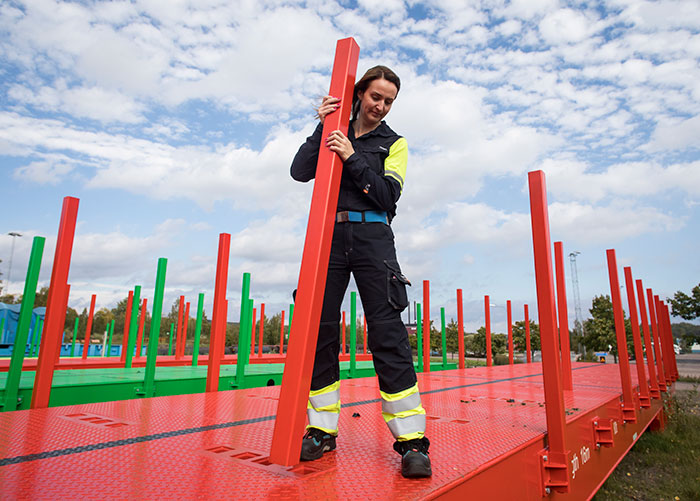 Jenny Lindström, section manager for Internal transports at SSAB in Borlänge. Demonstrates how to move the posts on the cassette. Photo: Henrik Hansson

The cassettes were developed in cooperation with the supplier and fully adapted to SSAB Borlänge’s needs. Kalle Hemmingsson, assistant operator at Internal transports, has led the development work on the new cassettes.
“We have based the development process for the new cassettes on what works and what doesn’t work so well with the yellow cassettes,” he said, and explained that SSAB’s own designers have also been involved in the work.
“Along with our own designers, we have selected a stronger and lighter steel grade in order to reduce the weight of the movable posts.”
Since the cassettes are largely used both for internal transport and unloading, the work instructions for loading cut lengths will be developed simultaneously.
“But the cassettes will also be able to be used for other types of driving, such as spare parts,” said Lindström, explaining that with the new cassettes in place, phasing out of the old carts used today can begin.