The dated, ineffective LD* waste gas scrubbing facility has been rebuilt into a long-term sustainable solution, which will be able to cope with high production volumes for the next 30 years.

“We saw that we needed to take waste gas scrubbing to an entirely new level to ensure we meet future requirements and a better cleansing result – quite simply to build the best system available on the market,” explains Mårten Nordlund, Project Leader for LD gas scrubbing. 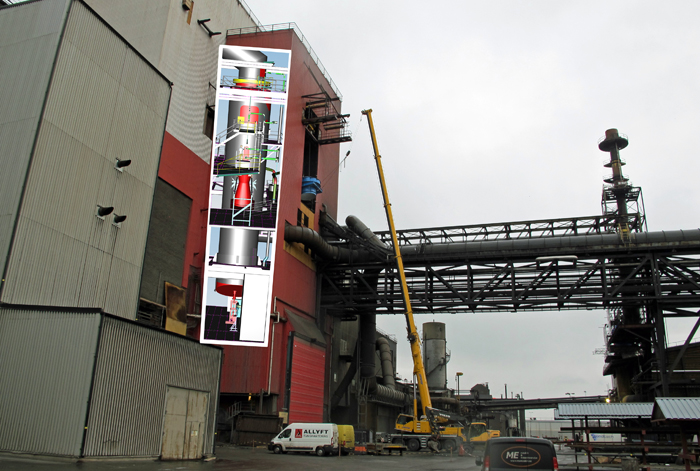 The facility being rebuilt has a 70-meter tall chimney stack and its well-known LD flare can be seen for miles around Oxelösund. The entire scrubbing facilities were to be replaced over two weeks, while the suppliers had taken five weeks to install the facility in the first place. The new installations included a new modern wet scrubber, which is the actual gas cleanser, new separators for water and dust particles, a new HyperCone which binds the fine dust particles to water and new fans.

“The gas scrubbing facility takes up a large part of the LD tower, with the lowest section beginning 20 meters above the ground and the top section is 50 meters up in the air,” says Mårten Nordlund
The steelworks now have a world-class waste gas scrubbing facility with cutting-edge cleansing technology that easily meets environmental requirements. Particulate emission have been reduced by approximately six truckloads a year and since the facility has far fewer moving parts, maintenance costs will be lower.

“I can now proudly proclaim that the new waste gas scrubbing facility have stedy levels below the threshold for particulate emissions from the LD converter. Which is great news for the environment, our employees and all Oxelösund residents,” says Madeleine Carman manager of the steelworks.

The priniciple of gas scrubbing
LD gas goes into the wet scrubber, which cools down the gas with water to 60-70 degrees in the first chamber where coarse particles are separated. Then the gas is fed through to the so-called HyperCone which consists of an inner and outer cone. The gas passes between the cones in a vacuum which separates out the fine particles using water. The particle-cleansed gas is channeled out to the chimney stack and the water in the water separator goes to an enclosed treatment plant. The bluer the flame burns in the flare, the cleaner the gas.

*LD converter – Steel process named after Linz Donawitz and consists of a vessel and lance for treatment with oxygen. Converts hot iron metal into crude steel by decarburizing