Newsroom Blog: Getting to know the whole of SSAB (or most of it) through the Technical Development Program
Share this:

Blog: Getting to know the whole of SSAB (or most of it) through the Technical Development Program 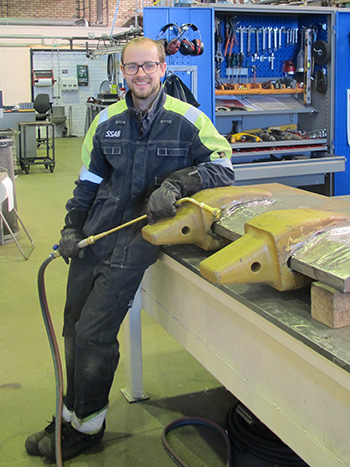 The first time I set foot within the gates of SSAB Oxelösund was in December 2014, when I was there for an interview for a thesis project. The interview must have gone fairly well, as I was offered the project. The work consisted of developing a new design proposal for a heating cover on our vacuum tank degassing station. Initially I was told that my work should mainly focus on "conceptual design proposals", but as an out-and-out calculation geek, I felt this sounded uncomfortably vague. But, both I and my supervisor realized relatively quickly that the problem with the current design was lack of strength, and to my great pleasure, at least four of my total six months were dedicated to calculation.

Following my thesis project, I was contacted by HR, who suggested I apply for a position as a "welding technician" at Oxelösund, as they felt I was suited for that role. I politely but firmly declined their offer: welding did not sound like the thing for me.

My supervisor tipped me off about applying for SSAB's technical trainee program TDP. Obviously, that sounded really exciting, and only a few days later my application was on its way.

I was accepted and started my first module at the Knowledge Service Center welding department in Borlänge. Once again I imagined that welding would not be my thing, but as time went by and everyone around me was so tremendously interested and really loved their job, it was impossible not to be inspired. And this was not just at the Knowledge Service Center; I met the same "spirit" in all the departments I worked in. There are so many people at SSAB who have a burning and genuine interest in their jobs, and that's exciting and inspiring for a young and inexperienced engineer who doesn't quite know what to expect of working life.

This spirit of enthusiasm and interest surprised me a great deal since I grew up outside Nyköping, where unfortunately that is not the usual picture people have of SSAB.

After my first module at Borlänge, I continued my training at Oxelösund, where I took part in projects in both the Markets and Process Development departments. My last project was together with Johan Myrsell (another TDP participant) in Logistics Development. Jonas Bollvik, the department head, gave us free hands to create a model for estimating increase in hardening. Both I and Johan started to feel tolerably well at ease and it was great to be entrusted with making direct changes to the actual production systems.

After the trainee program, I was offered a post in the Knowledge Service Center welding group, now called Manufacturing Technology. This time, I felt completely cool with welding, and I said yes straight away. I am so pleased to have taken part in TDP - you get to know people from lots of different departments and you find out who has the answers to lots of different questions.

So I can only conclude that HR knows me better than I do myself! Welding is such an interesting field and in fact it also involves a great deal of calculation.