Newsroom Blog: Is anyone not aware that SSAB has a technology-oriented trainee program?
Share this:

Now, maybe you’re feeling a sense of déjà vu? Haven’t you read this before?

Former program members Oskar Thorstensson and Tanja Halsteen each wrote a blog about TDP in the autumn, so now it’s my turn as well! Hopefully we now have an extended group of colleagues who are aware of the Technical Development Program. This improves the situation for future TDP trainees, as work is more effective when those around us understand the situation and the approximate competence level. 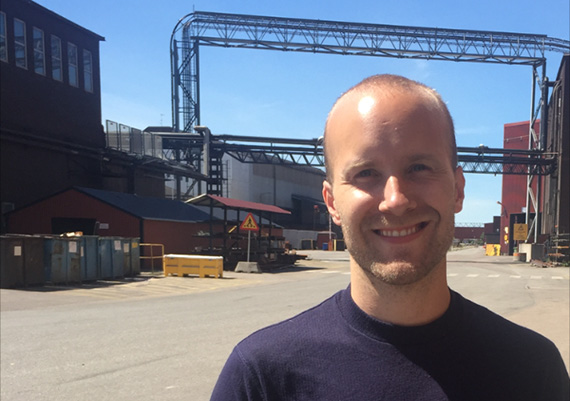 Let me begin by saying that it’s a really good program. For both personal and career development. The trainee is ‘forced’ every four months (when moving to a new department) to expand his or her network of contacts and to learn new procedures, ways of working and programs in order to be able to complete the project. It’s a bit like changing jobs every four months. Most of you will probably remember your first few days in a new job a bit more clearly than other days? At the end of each project, performance is assessed and constructive criticism is provided to both trainee and instructor.

So what does a TDP trainee actually do then?
I started my program at QTC in Oxelösund in 2014, when the focus was on evaluating a new measurement method for measuring hardness, and helping out with a cost analysis between our steelworks and those of certain competitors. New technology and a global project, it was great!
Four months just flew by and just as the stress about everything being new had started to fade I was moved to product development instead. I just had to start over again. This department had its coffee break half an hour earlier than QTC too, totally crazy. In product development, I had to investigate how the temperature in the furnace before hardening and the tempering temperature affect the mechanical properties of certain internal types. Ideal for me with my education in materials science.
The next step? Borlänge and the Knowledge Service Center, bonding section. The coffee break wasn’t as clearly defined here, but you had a coffee by the computer instead. A shame I thought, as I needed to get to know my colleagues in a short time. I was given a number of small projects, including automating the input of a spot welding standard intended for the German automotive industry and also to analyze the results following a trial of local re-heating of gas-cut edges. Tanja started her first project in Borlänge at the same time as I was there, so we also booked visits to many of the departments in Borlänge and went on a guided tour of the plant.

The final project was carried out in Oxelösund. My fellow trainee Oskar and I developed a new model to predict the growth of hardness in plate width, with the aid of SIMCA and SAS.

As a trainee you meet so many people, each of whom has their own job and duties, but what everyone at SSAB has in common is a desire to help and engagement in their own work. This mentality is very much appreciated.

The trainee program has helped me in my position as process developer at the rolling mill and post-treatment in Oxelösund. Among other things, it gave me a relatively wide network of contacts, knowledge of the company and an increased understanding of the needs of other departments...
and coffee routines.

Interested in the program? Do you have a good project for a future trainee? Please contact Mathias Thorén.