Battle of the Beasts continues

With a bit of unexpected luck, the HS Schoch–Hardox Truck Trial team drove home their second win of the season in the 2016 Europa Truck Trial championships.

It’s not just the UEFA soccer championships that are drawing cheering crowds of thousands this summer. In its 20th season, the European truck trial competition welcomes motorsport enthusiasts, tourists and fans to watch off-road vehicles and their drivers in a grueling battle to conquer harsh, unwelcoming terrain.

In this unique event, different classes of trucks compete by maneuvering between pairs of strategically placed gate poles throughout different sections of terrain. As tough as Hardox® wear plate, driver Marcel Schoch of the HS Schoch company, an SSAB customer, has made it through the second leg which recently took place in Dreis-Brück, a city in the volcanic Eifel region of Germany. 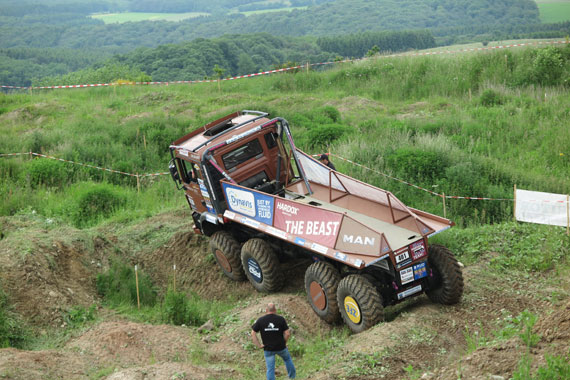 A change of luck for team HS Schoch–Hardox

Despite a flawless driving performance, Schoch and co-driver Johnny Stumpp from the HS Schoch Hardox team were trailing behind fellow countrymen Alex Budde and Sascha Heidenreich from the competing MSC Cloppenburg team all weekend. These front runners were poised for a win as the HS Schoch Hardox team battled a crumbling volcanic-stone surface and shifting weather conditions.

But just as with an “own goal” in soccer, good intentions turned against Budde, a seasoned truck trial driver. Already set to win right before the last section even without needing to reach the final goal, this true sportsman decided to attempt the goal anyway. His truck struggled – and stalled. The result: too many directional changes and disqualification by the sections’ judges.

So with a stroke of luck, Schoch and Stumpp advanced to first place and became the lucky winners who benefitted from this development.

“Maybe it was because of the generously proportioned sections that offered plenty of room for varied driving, because we usually do better in tight sections,” reflected Schoch, analyzing the competition. “Or maybe they completed a training program or optimized their truck even more,” he said. 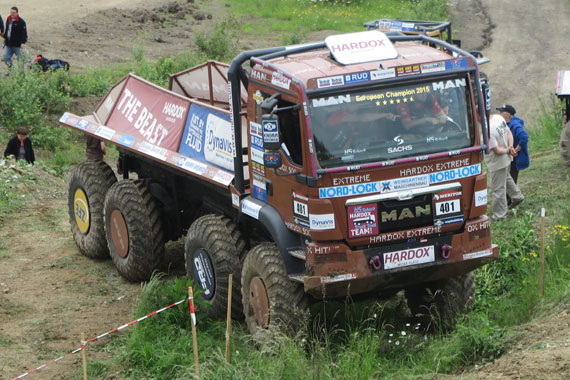 On June 25 a new round awaits the HS Schoch–Hardox Truck Trial team, who will face off competitors in a fresh battle in a granite quarry in Limberg, just outside Vienna. Here’s hoping our team has another good run!